Mother nature, while often a thing of grace and beauty can have also had her wicked side. As we saw this Thursday a flurry of snow could have a dramatic effect on how people doing business and operating in the New York area go about their days. MTA delay, heavy traffic or above ground public transportation simply ceasing operations until the situation clears are all realities of life in the average New Yorker.

During the winter and hurricane seasons, it often feels as if though we and our businesses are at the mercy of mother nature and her games. A bad snow day is at best it’s an excuse to work from the comforts of our own home and not brave the elements. But what happens when it ’s more than just a bad snow day? As stated previously the average snow day is a cause for delays and a few other inconveniences like canceled meetings but for the most part, work can carry on, but in the case of a larger storm or hurricane that is not often the case.

Hurricane Sandy was a great example of how fragile our business continuity could be causing nearly 70 billion dollars worth of damages and lost revenue. Some of the fallout from the 2012 hurricane is still being felt today (Ahem… Shutting down the L train). For those of us who were here to experience the effects of the storm, we were able to see the massive flooding that occurred throughout all the boroughs and large parts of New Jersey as well.

Unfortunately, many of us saw the storms ability to shut down our offices completely and cause work and productivity to come to a screeching halt. Large firms were for the most part able to weather the storm and survive the financial hit, but many small and medium-sized businesses weren't fortunate enough to have the capital to ride out the damages. These businesses couldn't continue operations for extended periods as the result of flooding, power outages, downed networks, or other damages. The financial toll was from work stoppage alone was in the billions. 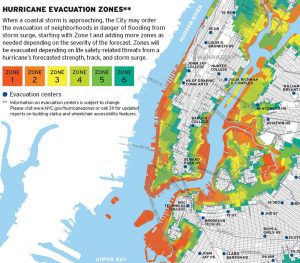 Looking at a map of New York it’s pretty evident that most areas in Manhattan are prone to some flooding. What is most concerning is that the area most likely to flood is Lower Manhattan which with the exception of Midtown tends to be where most offices tend to be located.

This poses a potential problem for any business in the general area when the storms come and threaten to shut things down for an unknown amount of time. The same can be said for heavy snow which isn't limited to just flooding areas or localized to certain areas in the city.

We a PCPC Tech recommend contacting your IT provider and asking if there is some sort of client resource center plan that they offer. A client resource center is a location in which you can temporarily base your business operations out of in the case of an emergency or natural disaster. PCPC aims to be among the best IT services New York has to offer and because of this has set up its headquarters to be ready in the case of any natural disaster.

Not only does PCPC Tech offer this to its clients who opt for it, but it has also been proven to work. During the Hurricane Sandy Crisis, BTQ Financial utilized the resource center by bringing in 16 of their key staff to work from the PCPC Tech Manhattan headquarters for roughly 3 months!

This resource is offered to benefit its Manhattan and New York area clients that can't afford to cease operations for an extended period of time and to keep their business continuity intact.

If you think your business could benefit from having this insurance against mother nature we highly recommend contacting your IT provider or giving us a call at (212) 315-0809 or shoot us an email at info@pcpc.tech